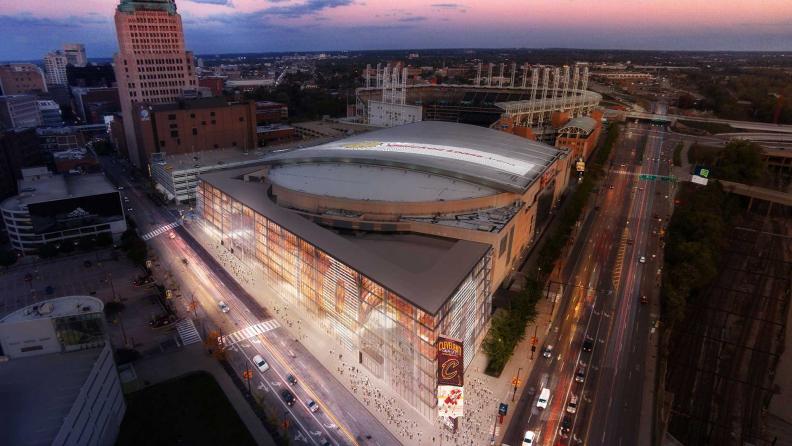 When the Quicken Loans Arena transformation project was initially unveiled in December 2016, the Cavs outlined some of the things they hoped to do as the facility, now 23 years old, was remade.

When the Quicken Loans Arena transformation project was initially unveiled in December 2016, the Cavs outlined some of the things they hoped to do as the facility, now 23 years old, was remade.

You’ve probably heard about the glass-enclosed facade, expanded entries, the improved views of the city, neighborhood themes in the concourses and an opened-up Loudville area.

But the mention of a Salt Lake City design firm during the Cavs’ partner summit on Monday could give us some clues as to how the team is hoping to weave all of its new spaces together.

The Cavs are working with Infinite Scale Design Group, which was founded after the work of partners Amy Lukas, Molly Mazzolini and Cameron Smith was so well-received during the 2002 Winter Olympics. The company, according to this 2016 Sports Business Journal feature on Mazzolini, designs “spaces at sports facilities tied to sponsor and team integrations, directional signs, halls of fame, and a variety of other services that fall under how fans experience a venue.”

Basically, Infinite Scale tries to incorporate new spaces in arenas and stadiums that look like a natural fit, not what Len Komoroski, the CEO of the Cavs and The Q, referred to Monday as “an afterthought.”

A corporate partner’s message in a sports facility often can look like an “add-on,” Komoroski said.

“As you look at the building, you have competing messages at times,” the Cavs CEO said of The Q.

At US Bank Stadium, the $1.1 billion home of the Vikings, Infinite Scale designed about 15 sponsor integration spaces.

As this Adweek story shows, US Bank, which reportedly paid about $220 million over 20 years for naming rights, has its name on all facades, including the roof, of the Minneapolis stadium. There’s a 3-acre “gateway” plaza with naming rights that were sold to Medtronic, a medical device firm, and there are entrances (the Polaris and Ecolab gates, for example) for which the Vikings sold 10-year marketing deals.

There are clubs with huge windows, high-tech equipment, comfortable seating and, of course, brand names tied to them. The group includes upscale spots, more traditional gathering spaces and large clubs that cater to sections of 1,450 to 2,800 seats.

Selling spaces to partners is a practice that’s almost as old as me, but it’s the job of Infinite Scale to make each location unique, while still fitting an overall theme — which, in the case of the Cavs, seems to mean flashy, high-tech, well-lit and open, with plenty of outside views.

“This will feel like a new arena,” Komoroski told the organization’s corporate partners on Monday.

In addition to Infinite Scale, the Cavs are relying heavily on Gensler, a San Francisco-based architectural firm whose D.C. office is advising the team on the redesign of The Q’s exterior, as well as six levels of its interior, plus associate architect Rossetti, a Detroit-based architectural design and planning firm.

Once the 2017-18 and ’18-19 Cavs finish their respective seasons, The Q will be closed for events through September each year, and the extensive interior work has meant that 330 people from the organization’s business team have relocated from The Q to the 250 West Huron Building at Tower City Center.

By then, you can expect to see plenty of creative, new spots — quite a few of which will have sponsors’ names attached.

Depending on your level of optimism, that season will mark Year 2 of LeBron James’ $200 million contract — or the second year of a painful rebuilding process that has nothing to do with an arena transformation.

You can follow me on Twitter for sports information and analysis, but hopefully not too many Jeff Green-inspired hot takes on Wednesday night.

Molly Mazzolini to be Honored with 2020 ATHENA Leadership Award