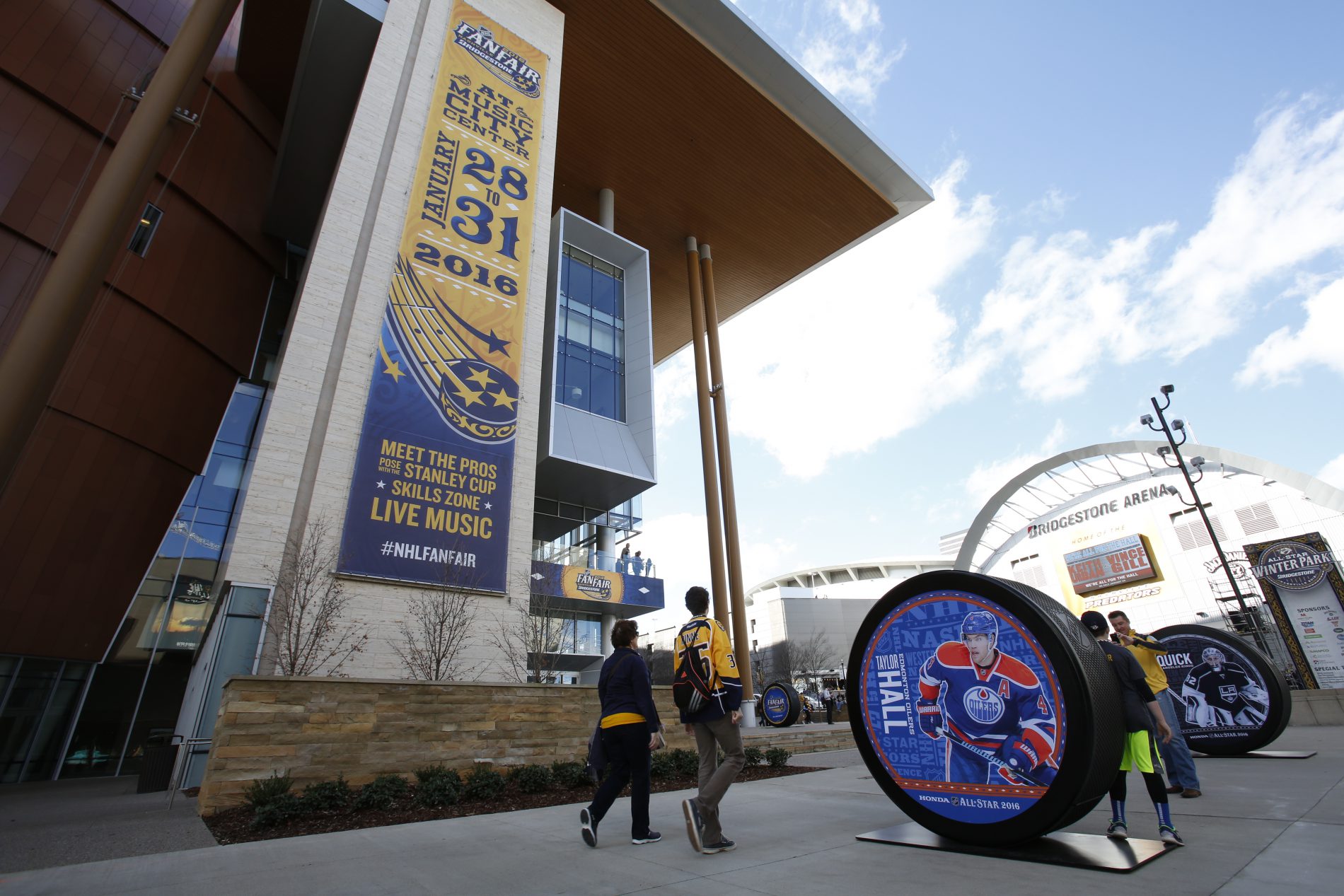 To paraphrase Mark Cuban: "You've got your Big Screen, you've got a cold one and a comfy couch. What is compelling and unique enough about attending a game that makes it worth the effort? We in the sports business don't sell the game, we sell unique emotional experiences." A very few sports design consultancies are creating events where something fresh and innovative happens.

Infinite Scale is one firm that dominates this vertical of experiential graphic design (XGD), breaking new ground with each project. This year, two of their comprehensive concepts thrilled loyal hockey fans and also enticed new fans to the sport. In Nashville their installations for NHL All Stars covered the town from the airport to the arena, and in Denver they repurposed the largest of the major league baseball stadiums into a winter wonderland of an NHL hockey scene—despite an absence of real snow − and drew fans toward Coors Field with festive lightpole banners in the narrow surrounding streets of the ballpark neighborhood. Not so very long ago, preparing a venue for a special sports event was fairly formulaic; logos were changed, a new field wall banner was placed. It was a simple approach. If sports generally have a particular look and feel, sports events offer an opportunity to break the mold. Now, event by event, the more strategic and thematic work of sports events designers is impacting the world—and the business—of sports.

Loving sports is not a requirement in this business, but it doesn’t hurt. Infinite Scale was born out of work for the 2002 Olympic games, and partners Cameron Smith, Amy Lukas and Molly Mazzolini are all passionate about sports, the athletes and the fans. “When there are 50,000 people at an event,” says Smith, “and I can see and hear and feel that our designs are part of their having a great experience, that’s very interesting to me. I get an emotional reward out of that.” The smiling faces on their website are an indication that this work makes others in the studio happy, too.

“For me,” says Design Director Dan Phillips, “and for many at Infinite Scale,experiential graphic design in sports events is the ultimate combination of the things we love most:  design and sports. It’s truly an exciting experience for fans to be at these events, and we feel great that they are living it, feeling it, interacting in an environment we helped create.” When people waited in line to take their picture alongside their favorite NHL All Star’s giant hockey puck, Phillips saw it as evidence of experiential graphic design success. An Infinite Scale sports event has what Cameron Smith calls “conceptual depth and thinking. An entire environment is created and the fans, even the people walking on nearby streets, can become part of the experience.”

Infinite Scale strives to create a complete fan experience, worthy of the ticket price. Each Infinite Scale sports event is unique to its purpose, place, teams and vibe. Their aim is to tell a story, building depth with atmospheric perspectives, pushing the envelope of design and the spaces it occupies. The story might not be only about sport; in Nashville and in Denver they were challenged with creating a system that felt like a sporting event, but also incorporated the history and feel of each city. “Our assets speak to how well we were able to do both,” Smith says, “and how fresh the system feels in comparison to other similar events.” A design council and design principles guide the work: Work collaboratively and engage the whole team early on, tell a story to engage the fans, be consistent in message and application, be flexible and adapt as needed, and maximize design impact for results.

Of course, there are challenges to the business of experiential graphic design for sports events. Infinite Scale staff are always multi-tasking, always part of a complex multidisciplinary team, always dealing with tight turnaround schedules. Integrating the rightful priorities and expectations of events management, sponsors, leagues, teams and others to be represented is an act of stewardship that also presents basic design considerations, not least of which is possible logos/colors clashes.

It’s a live event, after all…

These events draw tens of thousands, but there is no doubt that broadcast influences the experiential graphic design, too. Every event is televised. “Broadcast becomes a big component of the experiential graphic design and it does affect some of Infinite Scale’s decision making and strategy for placing elements to get best camera coverage,” says Smith. “We work across a larger group, from the league, to the venue, to the city or convention bureau. We develop plans—and then contingency plans—for a wide range of services:  master planning, concept design, design development, design integration across all platforms, as well as production and installation management.

Says Smith, “We’re about to do the experiential graphic design for U.S. Soccer’s 2016 COPA America Centenario across ten cities, eight NFL stadiums, for more than 80,000 people per game—as many as two million people over the course of the event. Anything can happen and Infinite Scale is prepared to deal with it.”

For the fifth year in a row Infinite Scale, in partnership with the NHL creative service department, designed the look and feel of the 2016 NHL All-Star Game. This marked the first time Nashville hosted the NHL All-Star weekend, which took place at Bridgestone Arena. With a new 3v3 game format adding to the excitement, Infinite Scale brought a unique look that differed from any other NHL event.

Since Nashville is a mecca for country music, Infinite Scale focused on bringing the vibe of Music City to the look and décor of this event. Inspiration for the graphics came from old school country music posters and letterpress techniques that create half tone patterns. The design system started at the airport, spread throughout the streets of downtown Nashville, greeted fans outside of Bridgestone Arena and continued throughout the venue. Fans, the NHL and partners alike were also welcomed by extensions of the system in five hotels, as well as at Fan Fair in Music City Center.

Unveiled for the first time at the NHL All-Star Weekend were 34 steel-framed dimensional hockey pucks that lined the streets of downtown Nashville. The pucks, designed by Infinite Scale, were six feet tall with machined edges to match the texture of official NHL game pucks. For this event, players voted in by the fans were represented on the pucks with All-Star game branding, the player’s name and the player’s team. Each night internal lights center-illuminated the graphics creating an additional experience and interaction opportunity for fans.

From the 92’ marquee banner on the exterior of Music City Center, to the bowl at Bridgestone Arena, to the pucks lining the streets of Music City, the 2016 NHL All-Star Game debuted a unique look that’s representative of Nashville’s culture while uniting hockey fans in a new and exciting environment.

The Colorado Avalanche played host to their former division rival, Detroit Red Wings, at Coors Field as part of the 2016 Coors Light NHL® Stadium Series. The two teams rekindled their old rivalry in an epic Alumni Game Friday night followed by a competitive Stadium Series game Saturday night, with the Detroit Red Wings taking the lead with only a minute left.

This series needed a design package that would bring the beauty of Colorado and energy of hockey to life, providing an electric atmosphere for the fans. Infinite Scale created a graphic system inspired by the mountain peaks and Colorado nature that consisted of graphic elements emulating rock, shards of ice and rays of sunlight. These graphics decorated the interior of the stadium, covering dugouts, the Rockies scoreboard and field wall. Infinite Scale capitalized on the need for seat kills to introduce a team match up between dugouts. Through player pictograms and team identities, the energy of the game was represented in each graphic. In addition, Infinite Scale designed an ice graphic for the center of the auxiliary rink and two dimensional team logos that were displayed on two risers in the outfield.

Flags representing the NHL® Stadium Series and both the Detroit Red Wings and the Colorado Avalanche teams lined the streets around the stadium and throughout the interior. Massive vinyl banners and tall vertical banners hung on the exterior and welcomed fans into the baseball-turned-hockey stadium.