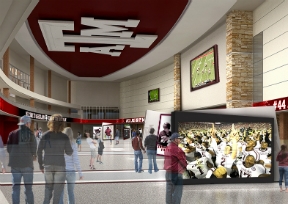 Long known as one of the most intimidating stadiums in college football, Kyle Field will soon be one of the largest stadiums in the game. As part of a multi-year redevelopment project, Infinite Scale was tasked with the creation of a brand and wayfinding system that would equal the scale of the “Home of the 12th Man” and the intensity of the legendary Aggies fan base.

Infinite Scale developed a clean, timeless approach to wayfinding that complements large-scale graphics that honor Aggieland’s fans, players, program, and traditions. This combination of branding and imagery, both contemporary and historic, creates a look that is uniquely Texas A&M.

The west side of the stadium is home to the Hall of Champions, a 30,000-sq.-ft. space designed to house and honor the athletic achievements and storied history of A&M’s athletic programs. Stretching the length of the football field, the soaring space features 10 interactive displays designed and developed by Infinite Scale to bring this history to life and provide Aggies and fans with a unique way to connect through great moments, stories, stats, and images.

The project, whose scale is unprecedented in college athletics, will be unveiled to the public when Texas A&M hosts Ball State on September 12, 2015.